The  monarchs of Christian Europe are focused on the hostilities and conflicts among each other, whereas the King of Hungary has long fought with the common enemy of all Christianity and he cannot expect help from them. In addition to many other castles and towns, the Ottomans also occupied Nándorfehérvár (Nandoralba, present day Belgrade, Serbia), the shield and bastion of Christianity. The Louis II, King of Hungary (1516-1526) needs the help of every Christian ruler, so he has sent ambassadors to the Holy Roman Emperor, the King of France and the other kings and princes. He sends his secretary, István Brodarics, to Ferrara hoping that the Duke would provide the necessary help. 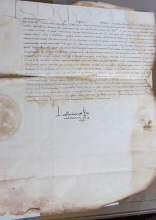 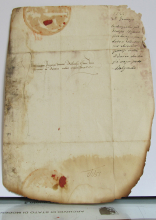 Louis II, King of Hungary (1516-1526) sends his greetings to Duke Alfonso I d’Este of Aragon [sic!]. He knows about a letter he received and a letter from his ambassador. He would be ready to help the prince in his great need if others did not oppress him. He sees with regret and compassion the plight of the Duke and is ready to help his cause to the best of his ability. He has therefore instructed his ambassador to represent the affairs of the Duke in front of the Pope and the College of Cardinals and wherever it is necessary. In a letter to the Holy Roman Emperor, he also drew attention to the Duke's cause to intercede for him with the Pope.

The letter of the Hungarian king is a reply to Alfonso I's letter asking for help. In the 1510s, the Duke of Ferrara first faced Pope Julius II and then Leo X, as a result of which he fell under the papal excommunication and lost the duchy of Modena and Reggio. In 1522 the Duke embarked on an intensive and wide-ranging diplomatic activity in order to win supporters for his cause and to reach out to Pope Hadrian VI in order to free him from the papal excommunication, and to regain the territories taken by Pope Julius II. The letter sent to Louis II, King of Hungary and Bohemia and the answer could be part of this diplomatic activity. 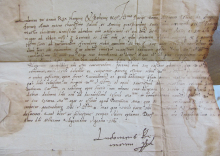 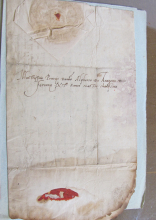 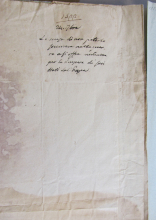 “(The Ottoman Sultan) is coming against us, [not only] to bring some strength, as he used to do, or a part of the country […], but at the same time to occupy and oppress the whole country. He is determined to attack us from three directions, with three very strong armies, and very far apart, to further divide and divide our rather weak forces anyway.” Unless the other rulers give help quickly, the King of  Hungary will no longer be able to resist the Ottomans’ power. Therefore, a few days ago, he wrote a letter to all the rulers to send at least money to set up and maintain an infantry, which the King is sorely lacking. The King is now again sending this message to everyone, including the Duke of Ferrara. With his help, he can advance not only the cause of the King of Hungary, but the whole Christianity. If the Kingdom of Hungary is destroyed by the enemy, the whole of Christian Europe will be flooded soon after. 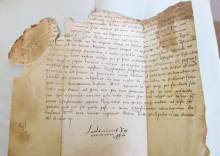 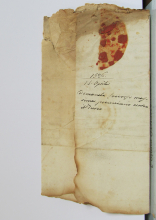