During the Long Turkish War (1593–1606) after the occupation of Esztergom, the Christian army began a siege to take back the castle of Visegrád. Twelve cannons with four hundred men were brought up to the mountain opposite the citadel, and the fort was under fire for two days. The Turkish guard who defended the castle then agreed to the conditions imposed by the Christians and gave his position up.

The watercolor depicting Visegrád is the work of the same Gabriello Ughi who also painted Esztergom. He also used gold paint to color the tents and other details that make up the siege camps. He highlighted the tents of the generals: Vincenzo Gonzaga (1), Gian Francesco Aldobrandini (2), Don Giovanni de’ Medici (3) and Marco Pio di Savoia (4).

During the siege, the Duke of Mantua was also accompanied by the young Claudio Monteverdi as a court musician. 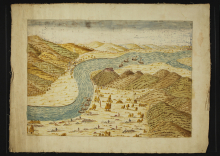 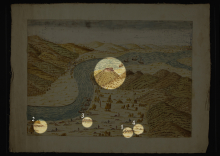