John Hunyadi  informs Francesco Sforza that he has received his ambassador, Antonius de Magnis de Bellano, whom he will return to the duke as he discusses with Ulrik Cillei. 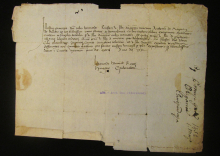 John Hunyadi informs Francesco Sforza that he has read the letter given to him by the Duke's ambassador, Jacopo Del Bene, and informs him that he will send his reply to his secretary, Albert Vetési, whom he has authorized to negotiate and agree with him on his behalf.

The two letters are a valuable testament to the lively diplomatic relations between the Kingdom of Hungary and the cities of northern Italy in the early 1450s. In 1452–53, after the death of Cosimo de’ Medici, who ruled Florence and after the extinction of the Viscontis, Francesco Sforza who took control of Milan also sought the alliance of the Kingdom of Hungary against Venice and the Holy Roman Emperor Frederick III., Florence and Milan tried to win the support of the main dignitaries of the kingdom, such as the Ban of Slavonia, Frederick Cillei and his son Ulrik, and the governor John Hunyadi. Hunyadi, who had previously been to Italy with Sigismund of Luxembourg and spent two years at the court of the Duke of Milan, Filippo Maria Visconti, between 1431 and 1433, sent Albert Vetési, while Ulrik Cillei sent Friedrich Lamberger as ambassadors to Italy. 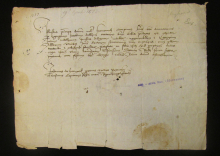 John Hunyadi informs Archbishop Dénes Szécsi of Esztergom that the Ottoman Sultan has abandoned the siege of Nándorfehérvár (present day Belgrade, Serbia). The mighty Turkish army, which, he writes, “destroyed the castle with cannonballs so that it was no longer a castle, but a field, because its walls were destroyed to the ground,” retreated. "With God's help, the Turkish emperor was cast out of the castle."

The original of Hunyadi's letter did not survive. However, due to Archbishop Dénes Szécsi, who made several copies of the letter with his chancellery to send information about the news of the triumph of Nándorfehérvár (present day Belgrade, Serbia) throughout Europe, the text of the document has been preserved in several places. In addition to the copy in Milan presented here, a copy of the letter arrived in Venice on July the 28th (!) according to the registry of the Secret Council. The Council also ensured that the messenger reached Pope Callixtus as soon as possible. The text of Hunyadi's letter was also preserved in the Cronaca Veneta dalle origini al 1458 (contemporary chronicle of Giorgio Dolfin) preserved in the Biblioteca Nazionale Marciana in Venice, in Italian translation. 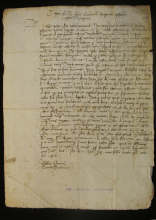