Ippolito d’Este (1479–1520) was the archbishop of Esztergom between 1487 and 1497, then the bishop of Eger from 1497 until his death. Through his mother, he was nephew of Beatrice of Aragon, wife of King Matthias I, which allowed him to hold high ecclesiastic dignities  in Hungary at such a young age.

In this letter dated to 6 January 1490 in Buda, the 11-year-old Ippolito congratulates Francesco II Gonzaga (Marquis of Mantova 1484–1519) on his marriage with his 16-year-old sister, Isabella d’Este. He wishes joy to both of them and prays to God for their happiness and the blessing of having children. However, he regrets not being able to get there in time for the ceremony.

He conveys the message of their nurse, who offers her service to Marquise Isabella around her future children. 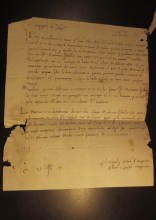 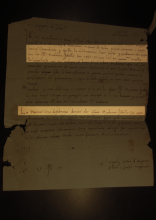