Ferdinand I of Habsburg

Letter from King Ferdinand I of Habsburg, King of Hungary (1526–1564) to Duke Alfonso I of Ferrara (1505–1534), a beloved relative of him, acknowledging his kinsman's loyalty to the Holy Roman Emperor contrary to the French and other Italian rulers. He then goes on to give a detailed account of the victorious military campaign in which his opponent, King John I (Szapolyai) -- whom he refers to as "the Vayvoda of Transylvania (present day Romania) and count of Szepes (present day Spis, Slovakia)" -- was defeated by his troops on 27 September (the so-called Battle of Tarcal or Tokaj), and after the defeat the vayvoda and his troops were pursued as far as Tokaj. The letter recalls that the bridge over the Tisza, over which the vayvoda had crossed to Tokaj with his light cavalry, was destroyed and sunk after the crossing, thus preventing the others from crossing. Many were lost and much military equipment was lost in the river. 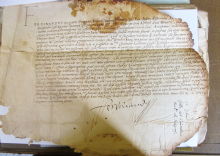 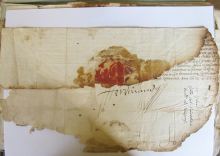