Ercole Pio, a descendant of the Pio di Savoia family, lived in Hungary between 1508 and 1510 as governor of Eger, in the service of the bishop of Eger, Ippolito I d’Este. Ercole started the work with great enthusiasm, writing several reports to his lord over the two years.

Of these, in a letter dated to 12 January 1509 from Eger, he expresses his concern about the plague that has broken out in the country, claiming that they have been passing villages ravaged by plague, where the number of deaths could reach 1,500. His road leads to Nagyszombat (Tirnava, present day Trnava, Slovakia), where the royal court has been temporarily staying as far away as possible from the areas infected with the epidemic. Here King Vladislaus II received him.

The audience of Ercole was organized by an Italian chamberlain of the king. Ercole handed over the gifts sent by his lord: a live cheetah, for example, along with his caretaker. Cheetah hunting was not widespread in Hungary, it was certainly brought to Italy from Constantinople in the middle of the 15th century and later it was a form of sophisticated aristocratic gifting. The presence of the exotic animal attracted a great deal of interest among Hungarians, which we can also read about in this letter. In addition to the cheetah, hunting dogs and hawks were also transported, which the king was particularly pleased with. Ercole, after the handover of the gift, went to Eger where he arrived after a journey described as adventurous. 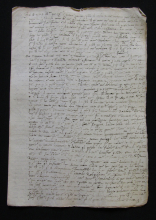 In a later letter from Ercole in April, we can get news of the cheetah again (Et per darli novella del pardo…) (1); he enthusiastically reports on the king's success in hunting, which he owes to the cheetah. “In tutti i casi ha lasciato cadere prede decenti, specialmente una volta nella Boemia, dove ha ucciso un cervo di due o tre anni ai piedi del suo cavallo” (“In all cases, he dropped decent prey, especially once in Bohemia, where he killed a two- or three-year-old deer at the foot of his horse.”) The cheetah was then sent by the king as a gift to the Polish king.

We can also read about the delay of the diet of Hungary, about the fact that Ercole, despite his being a foreigner, could be present at the meeting of the Royal Council. He talks about financial difficulties, the plague that reached Eger (la pesta in Agria) (2), his illness, which is why he did not write the letter with his own hands. We learn from the letter, that Tamás Bakóc would like him to ask for “galline indiane”, i.e. turkeys, from Ferrara (galine di India) (3). 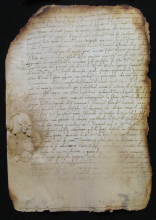 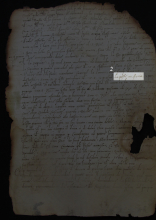 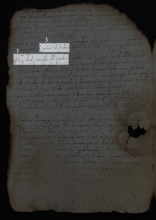 Ercole Pio di Savoia, apostolic prothonotary and governor of the Diocese of Eger, confirms that Pietro Maria Motellino, the parish priest of the Church of St. James in Eger, has come to him and claimed that in the neighborhood of the house of the parish, where John of Pozsegavar, archdeacon of Heves used to live earlier, he wished to create a garden, partly to cool himself in the summer heat and partly to feed his family, and therefore humbly requested that space be made available for such a garden on the bishop's property. The parish priest’s request was graciously granted, in view of the long and faithful service to their lord, Ippolito I d’Este, bishop of Eger. The governor therefore grants him the land indicated in the charter for his life-long use. 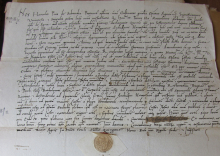 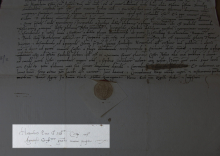 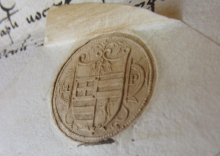